Published April 24 and updated May 8, this article co-written with Veronique Campion-Vincent (author of several books on urban legends since 1992) analyzes a set of “Coronavirus good advice” erroneously assigned to the famous Johns Hopkins University. We tell the story of this message, exceptional by its length and stability, which mixes truth and falsity, relay the arguments of the disclaimers (from Chili, the US, France, Italy) and analyze the reasons of its success in a universe in quest of secure information on the COVID-19.

Mixing true, incorrect and erroneous advice and lore on the coronavirus, the ‘excellent summary’ presented as emanating from Johns-Hopkins University was widely shared on social media, e-mails and WhatsApp messages these last weeks in French, English, Spanish and Italian.

In French-speaking countries, the JHU message appeared in late March. The oldest Facebook occurrence is from the 21st and the most popular (813 shares) from the 29th. The Google search gives 1,720 results (« Le virus n’est pas un organisme vivant, mais une molécule de protéine »), a number that still grows, and include local communities, shared interests groups websites and forums. On Twitter, where the message is less shared, a tweet from French television journalist Christine Bravo (3/30) referred to an English version of JHU advice. This lead us to study the diffusion of the English message from which French and Italian versions seem to originate. 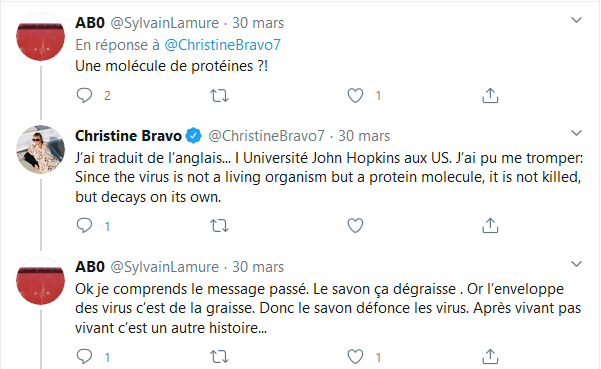 We identified 4 types of attributions : most of the messages refer to (1) the institution in itself, « Johns-Hopkins University », in French and English. But we also found a version attributed to (2) a person one step removed from this institution, « Irene Ken, whose daughter is an Asst. Prof in infectious diseases at Johns Hopkins University ». Finally, we noted that rare messages (3) have no attribution.

We were also intrigued by an unusual version, which has no examples in French, attributed to (4) a member of an institution, « Doctor Patricio Avendaño cardiologist from the Universidad de Chile who attends the German Clinic ». We found it on two sources, the oldest one from the 24th of March. As Paolo Toselli observed in his article published on the Italian website Leggende contemporanee, this version did appear before the English ones on the Spanish web, as the first Spanish tweet that refers to it is from the 19th of March. A debunk was published by La Tercera website, one of the most important newspaper in Chile, the next day. It leads Paolo Toselli to suggest that the Spanish (South American) version may be the original one.

Despite the existence of these 4 versions, and its length, the Johns-Hopkins University message is remarkably stable. In most of the samples, only the attribution of the message or the wording have changed, from one version to another, without reversing the order of the 19 different items. These wording changes seem to be done to improve the readability of the text, often altered by the automatic translation in French. French texts are, otherwise, mainly word to word translations from English sources. This stability does not exclude a certain creativity in the way the message is sometimes illustrated. We however find a few exceptions, including a forum post which present short-cuts and reversals of certain items. But there is no trace of items added by transmitters throughout the spreading of the text.

In the French, Italian and English versions, the JHU is, of course, quoted as a source because of its Coronavirus Resource Center, worldwide known for its world coronavirus cases tracker, updated frequently. We consider this attribution to be an exemplary case of the Goliath effect (Fine 1985), which seems to apply also in the local Chilean version, as the cardiologist does exist and is a local celebrity. We can also observe that a lot of similar good advice chains, in France and everywhere, refer to members of concerned institutions (“a as researcher”, “Claire Magne, a nurse from Montpellier University Hospital”, “a researcher collaborating with a task group dedicated to the fight against the coronavirus” etc.), or institutions themselves (“OMS (WHO)”, “UNICEF”). The use of call to authority to lend credibility to rumors is very common, and could be found in the Villejuif Hospital hoax (famous in France) in which a leaflet, said to come from this institution leader in oncology, denounced food additives as carcinogenic in the 1970s.

Fact-checking disclaimers demonstrate that the message is transmitted mainly by chain messages, especially using classic e-mails or WhatsApp. The role of this application in the spreading of misinformation is well-known. We were not able to have precise data concerning this specific (and private) communication channel even if we collected two complete examples of these chain messages with the associated conversations. It appears that the JHU message is shared mainly in a benevolent purpose, to protect relatives, friends or family, by sharing ‘good’ information and tips.

While we focus on the JHU message claims, we indeed see that not all of these claims are false, but that this bunch of ‘good’ advice is rather a mixture of general hygiene advice, doubtful and false claims. Many fact-checking articles from Chilean (La Tercera) Italian (Butac, Buffale), US (Snopes) and French (Agence France Presse, the original debunk was published by AFP USA before being published in French) sources have now been published. The AFP article is however the only one to debunk each item and conclude that only 5 of them are totally false and 3 of them are partly false. More interesting : 11 of them are true or partly true, and are reminders of ‘common sense’ advice such as using soap to wash our hands, often general hygiene recommendations by health authorities as the best way to get rid of the virus. It is an other argument for the fact that this message is transmitted with good faith, including by high-educated persons and health professionals, and that its very mixture of scholarly-like’ and colloquial language accounts for the seduction it entails and the wide circulation the JHU message has had.

This article concerns a chain-message that differs from other ‘Coronavirus good advice’ chains by its length and stability. Its purportedly scientific first paragraph confuses DNA and RNA – a major blunder – and contains assertions have been severely criticized in all disclaimers. These errors, however, did not alerte the message’s many transmitters, often belonging to the social elites, who found it was good to share.

While this is a clear indication of the compartmentalization of knowledge that is characteristic of our complex societies, it is also linked to the exceptional pandemic situation in which we live today.

Faced with the threat of a virus for which there is neither vaccine nor cure, the need for information is immense. In 2020, the hyper-complex information market is globalized and involves official sources as well as the media and social networks that respond to each other in echo or in contradiction and live in symbiosis. In this new world, new notions appear, others take on different meanings: lockdown, case-fatality-ratio, level of immunity, epidemic curve, etc. But all these notions present severe limitations that diminish their relevance. Scientists and experts – from virologists and epidemiologists to macro-economists – debate, engage in controversies, express contradictory judgments and sometimes seem to add to the reigning cacophony rather than clarify it.

In this fog of pandemic, reminiscent of Clausewitz’s fog of war (Thompson 2020), action, which is indispensable, precedes secure information. We are run after reliable information that hardly exists. And the temptation is great to become an armchair epidemiologist (Warzel 2020), talking, tweeting, even posting on Facebook peremptory commentaries and interpretations on subjects we are far from fully understanding. Ignoring precisely what we do not know, the most dangerous ignorance of all (The Dunning Kruger effect see Kruger and Dunning 1999), we operate on the margins of the plausible. Facts and graphs of reality lead to false conclusions. Media articles mix verified facts “with a touch of unproven conjectures” (Warzel 2020). In this generalized uncertainty, can’t rumors be the path towards an elusive certainty? In 1987, before the Internet, Jean-Noël Kapferer offered a dynamic definition of rumors as “the emergence and circulation in society of information either not yet publicly confirmed or denied by official sources” (Kapferer 1987 p.25). This perspective would appear to apply perfectly to our present lockdown in which we are largely nourished by the WorldWideWeb universe.

Coming back to the JHU message, this long text operates on several levels ranging from the scientific or pseudo-scientific:

* The virus is not a living organism, but a protein molecule (DNA) covered by a protective layer of lipids (fats) which, if absorbed by the cells of the ocular, nasal or mouth mucosa, changes their genetic code. (mutation) and converts them into multiplier and attacker cells

To disinfect and reuse a mask is perfect […] And when using the bathroom. […] Also keep your SHORT NAILS so that the virus doesn’t hide there

It also mixes truth, falsity, uncertainty. Much of the advice given echos recommendations or debates between experts or public figures. Thus Paolo Toselli (2020) draws attention to the resurgence in the Spanish press of a debate regarding the nature of the virus that coincides with the appearance of the JHU chain in Spanish-speaking countries. The use of ultraviolet light as a method of disinfection is also regularly discussed in the media for the disinfection of masks (with a risk of improper use and therefore danger for non-professionals), as utilized in China for public transport, and as being under consideration for other public places in the US, with UVCs, less dangerous for the skin. The JHU message thus appears to be a clumsy but sincere synthesis of these public discussions that transforms uncertainties into affirmations.

It is this very blend that constitutes an effective form, one that corresponds to our confused expectancies. A process of ‘willing suspension of disbelief’ takes place, leading us to ignore problematic assertions, favor common sense advice, and pass on the entire message as received.

One would like to know the author of this happy mixture, to discover the Urtext, the original form whose quest haunted folklore studies in the early 20th century when evolutionist ideology reigned supreme. But this original text and its author will never be found. The rumor specialist is eternally obliged to answer this seemingly logical question so beloved by journalists in a hurry: who created this rumor, who authored the first message? The answer is that the unknowable creator’s identity doesn’t matter; what counts are the transmitters, those who repeat the message or image, who pass it on. One does so because one is moved, interested. One is not necessarily convinced, but one never knows. And of course, in 2020, with computers “sharing” is all that much easier.

The Italian author of the Butac disclaimer published March 26 accurately concludes with proposals for steps to follow when receiving such seductive messages in the future:

In the end, the text is not as dangerous as some others, but most of the information it contains is erroneous at best. At the risk of sounding like a scratched record [that repeats itself], do not transmit chains that you receive via WhatsApp, they are useless and risk transmitting false information. You want to share something useful? Go on the websites of institutions dedicated to the subject, do some copy/pasting and, if you wish to pass the time, create a meme based on this certified information and pass it along, indicating the link to the original source.

Thank you to Michael Houseman for his linguistic revision.

Thompson, D. 2020 “All the Coronavirus statistics are flawed”. The Atlantic, March 26.

Warzel, C. 2020 “What we pretend to know about the Coronavirus could kill us”. The NY Times, April 3.