April 1895. M. Mayer discovered a strange collection of rats, their tails intertwined and bound together. Dissimulated in a barn, their corpses were trapped in the ice. Surprised, M. Mayer decided to send the specimen to the Strasbourg Zoological Museum. And he was very right : the specimen was a rat-king, a phenomenon barely observed in Europe and in the rest of the world. Is the rat-king the true king of the rat people ? An hoax or a scientific curiosity ? 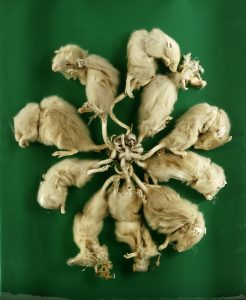 According to Le Magasin pittoresque (1854), the engraving’s caption, written in German, includes religious and moral reflections about Strasburgians’ sins. God uses “terrible messengers and miraculous events” to communicate to his people. The rat-king warn Strasbourg inhabitants from “foolish projects that Christians would shape against other Christians”. It is possible that the text make reference to the capture of Strasbourg by king Louis XIV two years ago. In theses times, finding a rat-king was understood as a bad sign or augur epidemia. 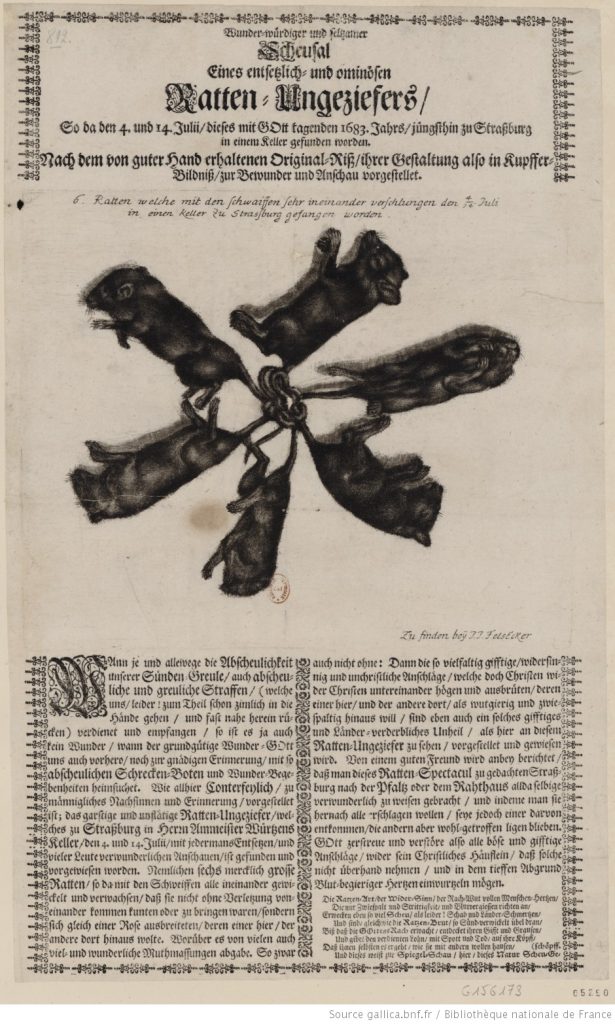 The few preserved rat-king specimen come from the XIX and XXth century. We can however find traces of this phenomenon in engravings, paintings and texts since the XVIth century.

In itself, the French expression, roi-de-rats, and the English one, rat king, are calqued from the German Rattenkönig. The authors of Der Rattenkönig monography (1524), Dr. Becker and Kemper, state that Martin Luther was one of the first to use “Rattenkönig” to describe the Pope’s attitude of “sponging” off people. In Gesner Historia Animalum (1551 – 1558) the rat king designate a rat feed by others in its old age.

The French expression roi-de-rats is distinct from roi des rats and is better translated by “king made of rats”, instead of “king of the rats”. As a specimen, the rat king forms a crown, as the Bulletin d’étude des sciences naturelles de la Marne (1934, t.14, n°2) notes. Even today, we suggest that a rat king can not feed himself. It has to be feed by other rats. For Bénédicte Girodeau, the author of a quite interesting Symbolique du rat (2002), this hierarchy between the feeders and the feeded remind the anthill in which the queen is feeded by its “subjects”. We can also find iconography portraying a king of the rats is seated in a knotted tails throne. 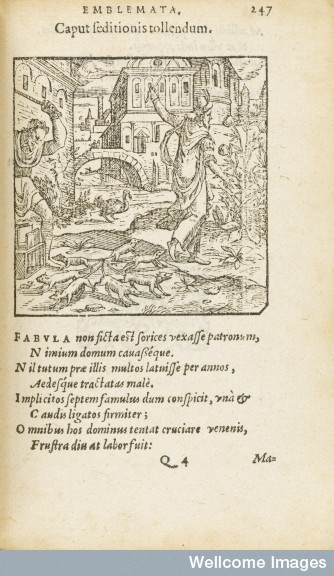 King of the rat people

According to Dr Reh, a Middle-ages belief attributed to the king of rats an extraordinary size and powers over the rat people. In old texts we indeed find traces of this king of rats figure. 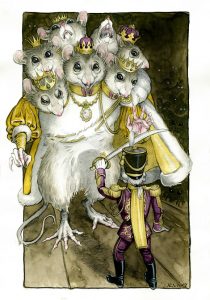 Kalila Wa Dimna is a collection of fables written by Ibn al Muqaffa’ around 750. In several manuscripts we can find the story of a king of rats, confronted to the cats’ plague and counseled by a clever vizir. At the end of the fable, the vizir exposes his project. He proposes that rats create in every houses a rathole that will be big enough to host the entire rat people and feed him for 10 days. The king and his people will choose for residence the apartment of a rich owner. Day by day, they will slowly destroy the furnitures without touching the food. The owner will adopt one, two cats to help his single one to stop the rodents. The rats will indeed ramping up their damages, and slow down when the owner will desperately try to kill one cat. And again ; he will conclude that cats are useless to protect his house. The rats operation will be repeated in every houses. The humans will finally think that cats are responsible for their houses deteriorations and start hunting cats.

It is also interesting to note that Hoffmann’s Mouse King is a multi-headed creature :

“Ah! that is just what Mary could not do, for – would you believe it? – right under her feet burst up sand and lime and crumbled stone, as if thrown out by some subterranean power, and from the floor arose seven mouse-heads with seven glittering crowns, hissing and squeaking terribly. Before long, the body also squeezed itself clear, on the neck of which grew these seven heads, and the huge seven-crowned mouse shrieked with all his throats, three times piping out a greeting to his army, that at once set itself in motion, and charged trot, trot, pit, pit, dot, dot, straight upon the cupboard, straight upon Mary, who still stood by its glass front.”

Is the Rat King an hoax ?

It is certain that some specimen has been faked by human hand and being exposed in fairs, Bénédicte Girodeau says.

The Tartu University Natural History Museum possesses the last discovered rat king, a specimen find in an Estonian farm in 2005. In that case, Andrei Miljutin is pretty sure we are not facing a fake king. According to the Museum’s curator, a group of rats gathered in a confined space can hypothetically form a rat king from their tails intertwined and agglomerated with cold and blood and other sticky substances. By trying to escape from that space, the chaotic movement will finally create a knot. The zoologist Alfred Brehm (1829-1884) made similar conclusions.

However, this hypothesis is not the only one. Others highlight the youthness of the rats ; young tails are more flexible and viscous, and prone to be bound together. The Revue hebdomadaire (1906) also highlight Pr. Meisner improbable theory : the mother rat would kill her own baby rats to form a rat’s nest with their tail.

We know for sure that rat king proceed from black rats (rattus rattus), supplanted today by its city cousins (rattus norvegicus). Rattus rattus tails are longer and more flexible and, finally, would foster the knots creation. “Ship rats, according to some theories, are climbing rats, so their tails have a grasping reflex,” says Emma Burns, the curator of the Otago Museum, which possesses an other rat king specimen.

Rat king is a little know phenomenon, even if rats are very present in urban legend and contemporary folklore due to its place in our environment. Its king inspire some of our contemporaries, like writers Lorrie Moore and Terry Pratchett of contemporary artist Katharina Fritsch. We can also meet him over creepypastas, theses horrific and anonymous stories that have emerged on the Web :

We would like to thank the Strasbourg Museums and Marie-Dominique Wandhammer for their precious help.

Andrei Miljutin . « Rat kings in Estonia [read in pdf] » in Proceedings of the Estonian Academy of Sciences. Biology. Ecology, 2007.

« The complicated, inclusive truth behind the rat king » in Atlas Obscura. Décembre 2016.