The Devil and the Wind Blowing Around Strasbourg Cathedral

Known since the 19th century, the legend about the Devil and the wind blowing around the cathedral is still famous in Strasbourg.

“In the small streets around tall buildings such as churches and cathedrals, often built in high places […], the wind blows more furiously than anywhere else”, as Paul Sébillot (1843-1918) observes in Folklore de France (1904). In Strasbourg, the wind seems to blow around the cathedral and to rush in the small square preceding the facade. Many inhabitants of Strasbourg know the magical explanation behind this phenomenon. Here is the legend as I heard it from them:

Riding the wind the Devil came to Strasbourg one day. He noticed the Cathedral’s beauty, and left the wind at the entrance to visit the inside. Watching all the Cathedral’s wonders, he forgot to come out. Today, it is said that the Devil is still in the edifice and that the wind runs, impatiently, in the streets around, waiting for its master.

A similar version is told by the Alsatian folklorist Auguste Stoeber (1808-1884): the Devil saw “its own representation in the pediment ; that was something he liked and he thought that the interior would be beautiful too”. In the cathedral, a charm kept the Devil inside and he could never go out. “Outside, the wind started to turn around the cathedral, screaming. Today, he still waits for his master and drags his crazy existence around the cathedral.”

The Devil’s vanity is underlined in a children’s book written by Cécile Dupeux, curator at the Musée de de l’Oeuvre Notre-Dame:

The Devil was flattered to see himself represented among the sculptures and he wanted to see if his image was depicted in the interior (Dupeux, 2007).

In Les Légendes du Diable en Alsace (2005), Gérard Leser proposes a very different story. During a travel in Europe, the Devil heard that a cathedral was under construction in Strasbourg. He arrived in the middle of a gigantic construction site and saw his portrait as the “Tempter and the foolish virgins”: 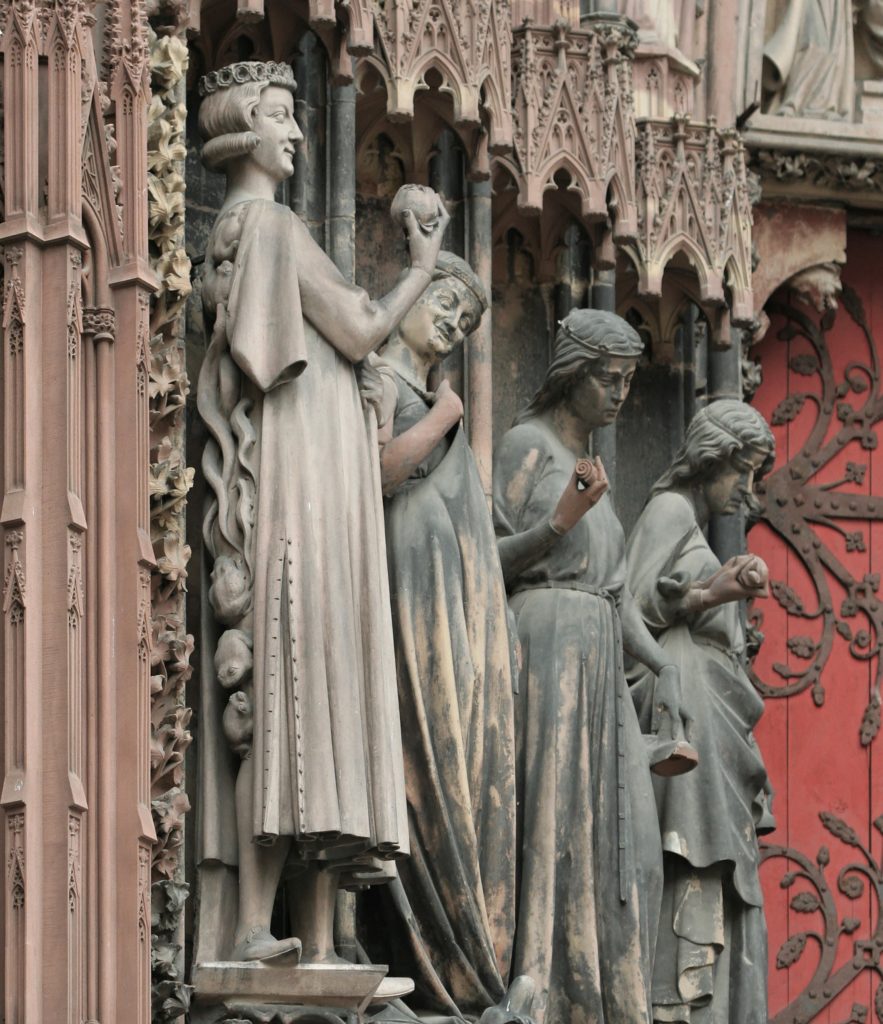 In « The Tempter and the foolish virgins », the Tempter is depicted as a young man with fancy clothes hiding toads, lizards and snakes. He offers an apple to the virgins, whose foolishness is symbolized by their overturned oil lamps.
(source : Coyau / Wikimédia)

The Devil entered in the nave and, contemplating the Angels’ pillar, was surprised by the altar bell. He was instantly stucked in one of the massive sandstone columns. He managed to escape after centuries, forgetting the wind at the entrance of the cathedral.

The rich context of this version leaves us to think that many details are a pure invention of its teller. After the nave’s achievment in 1275, the construction of the western part of the cathedral started. The “Tempter and the foolish virgins” statues were carved 1280-1290. Such precisions and historical consistencies are barely present in traditional legends. More over, it is the only version mentioning the cathedral under construction. 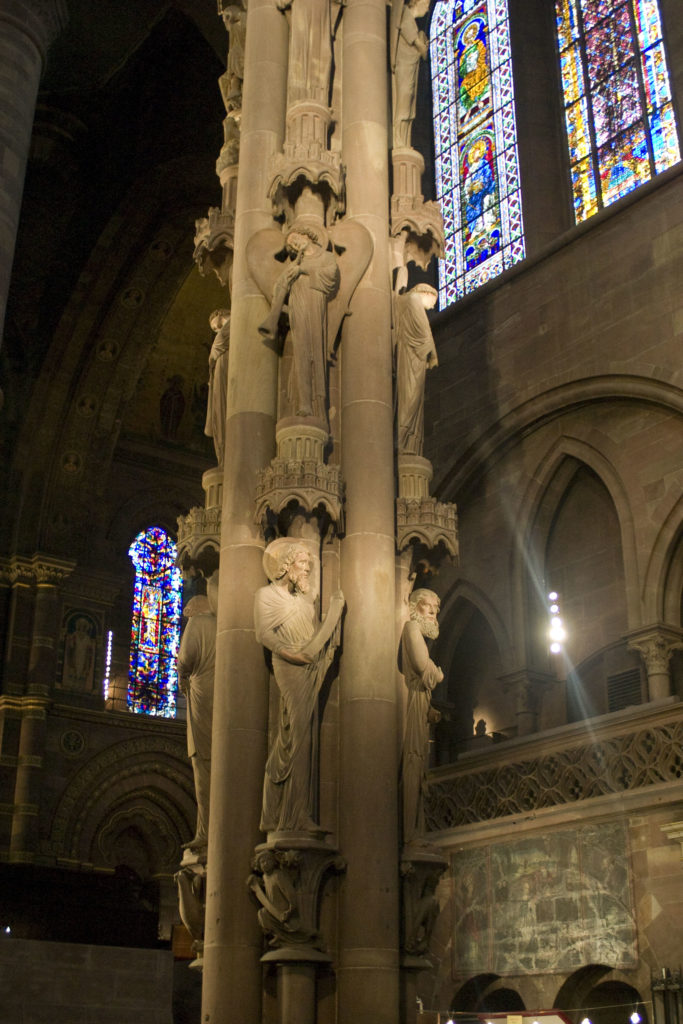 The Devil Surprised by the Religious Service

Except from these details, Gérard Leser’s version is very similar to other versions including the “Devil suprised by the religious office” element. In Kilchhofer (1859) and Sébillot (1904), for example:

Feeling bored in his hell, Satan brought in a Harz wind to serve as his steed ; he went to Strasbourg, jumped from his horse and entered in the cathedral, leaving the wind in the square. He was visiting the cathedral and all its wonders when the preacher raised the host: Satan instantly found himself stucked in a pillar. Which one ? It is hard to say ; but the wind is still waiting outside and, when he gets impatient, he moves the windows and disturb the passers-by.

The German Harz massif is known as the Walpurgis mountain. According to some popular beliefs, it’s “a high place for witchcraft. Goethe mention this cursed place in a famous part of Faust related to the Walpurgis night”, as Gabriel Gravier explained in the 4th volume of his Légendes d’Alsace (1989).

Other Legends in France

The legend from Strasbourg is not the only one representing the wind blowing around cathedrals in a personified way. Paul Sébillot (1904) quotes a Burgundian legend:

The Wind and the Devil, discovering the world together, arrived to the Autun Cathedral. The Devil heard that the chapter was reunified and couldn’t find a way to be agree on something. He said to his friend that he could enter to make peace and that it would not take long to do so. But he stayed and the canons are still discussing. The bored Wind blows around, taking hats and lifting skirts. 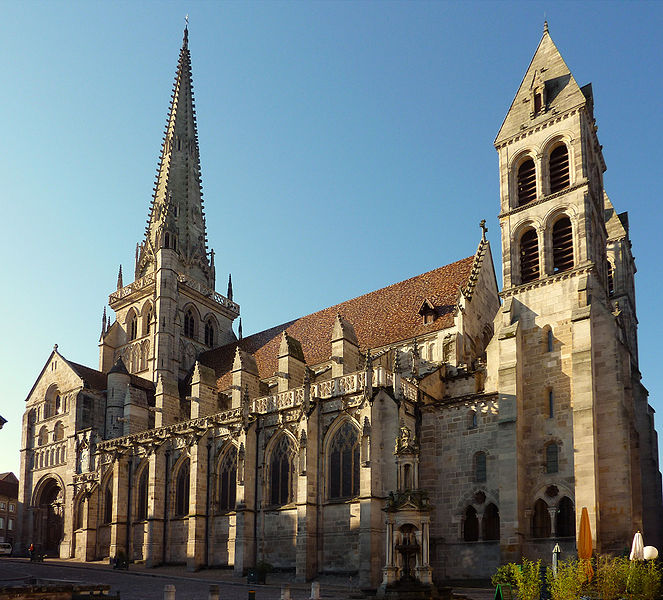 The Strasbourg Cathedral legend is probably today the most known. In contemporary and oral versions, the complexity and magnificience of the cathedral catches the Devil. With this story, the people of Strasbourg expresses, in some way, their pride for this monument, described by Victor Hugo as melting the « gigantic and the delicate » !