According to a famous urban legend, a man had been admitted to hospital after his gay partner put a gerbil in his rectum. Far from being anecdotal, that odd sexual activity would even have a name, ‘gerbiling’, and be practised by some gay couples. It is necessary to go back to the 80’s to trace its apparition, at a time when homosexuals where still perceveid as socially and sexually deviant.

‘Gerbiling’ as an Early Internet Hoax

The gerbiling story may have become known in France in the mid-2000’s, when a fake AFP News press release spread on the Internet:

‘Raggot the Hamster’ is on air

It even had its moment of glory when a radio journalist read this fake press release (that he believed was true) on air:

Shared on YouTube under the title ‘Le Hamster Raggot Depeche AFP Interdite’ (‘Raggot the Hamster censored AFP News Press Released’) in 2007, the extract reaches today more than 3 million views. It has been authentified by RTL as having been broadcasted on RTL 2. However, we don’t have any confirmation of the original date.

This French fake press release is, in fact, a word of word translation of one of the many versions of this gerbiling hoax, circulating on the American Internet since 1993:

“In retrospect, lighting the match was my big mistake. But I was only trying to retrieve the gerbil,” Eric Tomaszewski told bemused doctors in the Severe Burns Unit of Salt Lake City Hospital. Tomaszewski, and his homosexual partner Andrew “Kiki” Farnum, had been admitted for emergency treatment after a felching session had gone seriously wrong.

“I pushed a cardboard tube up his rectum and slipped Raggot, our gerbil, in,” he explained. “As usual, Kiki shouted out ‘Armageddon,’ my cue that he’d had enough. I tried to retrieve Raggot but he wouldn’t come out again, so I peered into the tube and struck a match, thinking the light might attract him.”

At a hushed press conference, a hospital spokesman described what happened next. “The match ignited a pocket of intestinal gas and a flame shot out the tube, igniting Mr. Tomaszewski’s hair and severely burning his face. It also set fire to the gerbil’s fur and whiskers which in turn ignited a larger pocket of gas further up the intestine, propelling the rodent out like a cannonball.”

It should be noted that the only difference between the French and the American versions is the nature of the unfortunate rodent. Gerbils are barely known as pets in France, which is not the case of hamsters. It can easily explain that minor amendment of the original version.

The popularity of Darwin Awards in the early days of the Internet in France can possibly explain why this gerbil story traveled from the US to France in the 2000s. Created by an American student in 1993, the Darwin awards “commemorate individuals who protect our gene pool by making the ultimate sacrifice of their own lives. Darwin Award winners eliminate themselves in an extraordinarily idiotic manner, thereby improving our species’ chances of long-term survival.” In 1998, the gerbil story was published on their website and labelled as an urban legend.

Before being an internet hoax, this urban legend was (and is still today) a story spread by word of mouth in two different versions: the first one involving a gay couple and the second one a celebrity suspected to be a homosexual.

Richard Gere is the most famous victim of this last version, according to Snopes founder David Mikkelson (1998):

Although the legend homed in on various targets when it first appeared (including a Philadelphia newscaster), it has clung tenaciously to Mr. Gere’s name since at least the mid-1980s. Rumors that he had an emergency “gerbilectomy” at Cedars-Sinai Hospital in California have spread far and wide, and countless doctors and nurses claim to have participated in, been on hand during, or heard from a reliable colleague about, the procedure. […] The rumor’s spread was aided by an anonymous prankster who, not long after the film Pretty Woman led to a tremendous increase in Gere’s popularity, flooded fax machines in Hollywood with a phony “press release” purportedly issued by the Association for the Prevention of Cruelty to Animals, claiming that Gere had “abused” a gerbil. But, as a reporter from the National Enquirer found when he attempted to track down the gerbil story, there were no facts to be had.

In the 90’s, many bad jokes and TV gags refer to this alleged gerbilectomy. Folklorist Norine Dresser collected some of these jokes in 1994:

How does [Gere] practices safe sex? He uses a mousetrap.

In a 1997 episode (‘The Cartridge Family’), The Simpsons symbolically put an end to that story: 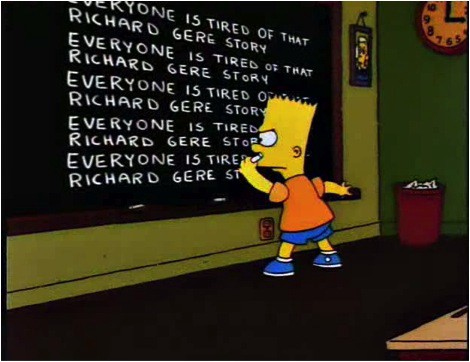 In a French reference book about rumors, Jean-Noël Kapferer (1987) argues that celebrities are predisposed to that kind of rumors about their private life. They accumulate enormous media attention and a “considerable ambiguity generated by the secrecy that surrounds them”. Bigger that secret is and stronger are the rumors in their effort to offer an overview of the private life of celebrities … And it is often to describe an out of the ordinary or perverted sexual life.

This motif can be traced back from well before the contemporary area, as French urban legends specialists Jean-Bruno Renard and Véronique Campion-Vincent tell us in De source sûre : nouvelles rumeurs d’aujourd’hui (2002). In the 18th century, it was told that Catherine II of Russia was so sexually insatiable that she used to have sex with animals. According to a rumor, she died after “a brutal intercourse with a horse”. This reputation of debauchery was mainly built by French anti-Russian historians. Sarah Bernhardt (1844-1923), as for her, would have tried to have sex with a young alligator; an act that is, by the way, anatomically impossible to perform.

Power and sexual desire seem to go hand-in-hand in our imagination and true facts sometimes give credits to hoary legends. Jimmy Savile, Harvey Weinstein or Jeffrey Epstein used, for example, their power and influence to commit sordid actions which remained cover up for a long time. The taboos highlight by these affairs, such as pedophilia, are however absent from sexual urban legend whose main purposes are to shock but also to make fun of specific social groups and provoke laughter.

Gerbiling as an Alleged Gay Sexual Practice in the 80’s

While discussing a gay acquaintance recently, my friend Mary, a nurse, lauded him by adding, “and he’s no damn gerbil stuffer, either.” When I protested that she should not perpetuate cruel stereotypes of our homosexual brethren, she informed me that she personally had witnessed a fellow admitted by her hospital to remove a deceased gerbil lodged in his rectum. That gentleman is now doomed to be tied to a colostomy bag through eternity. What I’d like to know is, what are the mechanics and philosophy of gerbil stuffing? How are the gerbils inserted and retrieved? Don’t they bite and scratch? Why not hamsters or snakes? Is this a common practice? My curious friends and I await your reply with bated breath.

To which Cecil Adams answered that, while insertion of objects in the rectum are a well-documented and not specifically gay or straight practice, “live or recently deceased fauna are something else. Rumors of gerbil (and mouse or hamster) stuffing have been circulating since about 1982 […]. Having investigated the matter in some depth, I’m inclined to write the whole thing off as an urban legend.”

Folklorist Becky Vorpagel (1988) found this legend to be widespread in all USA and specifically in Philadelphia, where her study was focused. Many variation exist, on the ‘techniques’ used by or the consequences for the gay couple.

Is ‘Gerbiling’ a Homophobic Legend ?

At the start of the 80s, gay men were already perceived as socially and sexually deviant. And if anything is not a secret, it’s how especially openly homophobic American culture was throughout this decade. With the addition of AIDS and its attendant narrative of Gay Desires Being Punishable By Death, there seemed to be concerns in the mainstream that maybe gay people, already alienated, weren’t being alienated quite enough. Toss interspecies sex with small dirty rat-like creatures into the mix, and you simply get a variation on a theme: gay sexuality as a realm plagued with abnormality, shame-inducing behaviors, and incomprehensible stupidity.

Urban legends play sometimes the role of a hate tale, a negative story where the stigmatization of a group characterized by a social or ethnic difference can be indirectly expressed. In the gerbiling story, homosexuals are particularly described as individuals who place pleasure above all moral values, even when it involves torturing a poor gerbil.

Association between homosexuality and deviant practices is not a new thing, as Norine Dresser shows (1994):

Tales about rodents inside rectums of homosexuals have circulated before. During the Vietnam War, there was a popular one which was part of a group of stories advising ways in which to avoid the draft. A potential inductee arrived for his physical and when the doctor asked him to “bend over,” he noticed a tail hanging out of the anus. “What’s that?” asked the physician. When the young man answered, “That’s my rat,” he was immediately referred to a psychiatrist and disqualified because this was a sign of homosexuality, which was not permitted in the service

Many of these legends are close to medical folklore. “Medical students, at least in folklore, are notorious for grisly jokes with sometimes tragic results”, as Jan Harold Brunvand comments in a chapter of The Chocking Doberman (1984) dedicated to medical urban legends. In France, we talk about carabin humor (humour carabin) and it is sometimes hard to separate stories that actually happened in hospitals and urban legends. One of these medical legends told by Brunvand is close to our gerbiling story:

The patient is undergoing an examination during which the specialist must insert a probe with a small electric light on it into the rectum. Supposedly a spark from a loose connection ignites the intestinal gasses and the patient explodes.

As many urban legends, the gerbiling story expresses the fear of the other (stranger, homosexual, etc.), to which we attribute deviant behaviours and can strenghthen our sense of belonging to a group with positive moral values. At least in France, the vision of homosexuality depicted by the gerbiling stories has however changed: gay couples and characters are now common in French popular TV-series. They participate, alongside important social reforms such as the same-sex marriage in 2015, to normalize our perception of homosexual couples. We can suppose that gerbiling stories are now told because they are both shocking and funny. The pleasure of telling a good story, however, does not prevent us from questioning the representations and often conservative values behind urban legends.